From Group to Team

If the team aren’t aligned, communicating clearly and respectfully, and collaborating, it’s can be like herding feral cats!

From Best You to Best Team:

Teams who see differences as value adds, rather than frustrations, will always achieve more in less time, with far less stress.

Teams who pay attention to how they communicate will always handle conflict in proactive, solution focused ways.

Teams who hold each other accountable will be the first to step in and support each other to get the work done.

According to a 2020 report by Clear Company, 97% of employees and executives believe a lack of alignment within a team impacts the outcome of a task or project.

Working with thousands of managers across a diverse range of industries and countries, when it comes to team dynamics and team building, the common issues they share are:

… especially since the pandemic:

These issues leave leaders and their direct reports feeling lost, insecure and worried for their jobs. 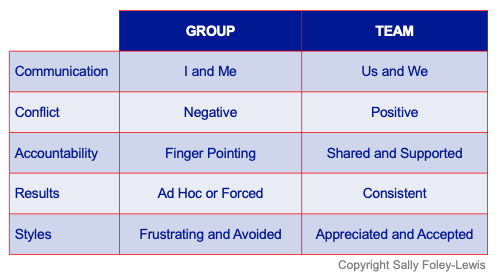 Working with two large teams within the same organisation, the leaders of the respective teams shared very similar issues. Both leaders wanted their people to:

Each person completed an assessment and then each team came together to undertake a thorough debrief of their results, look at the group summary in the context of what they means for them going forward; work through a range of exercises and workshop a range of team building skills through scenarios, activities and small group discussions.

Both teams (during both sessions) had everyone participating fully, asking more questions, being curious and present with each other. Some of the comments shared from the participants:

“I loved being able to understand why I sometimes feel like no one gets me. I now realise I need to adjust how and what I say so that I’m understood.”

“I tended to avoid [this person] because I was often frustrated by them, now I get it. I can now see that they behave and offer a perspective different to mine which now value for helping me have a deeper view on our projects and work. This, just this alone, has changed my whole approach to working here!”

From Group To Team

A blend of assessment and workshop to create productive, collaborative and high performing teams. The key major areas this program covers are: 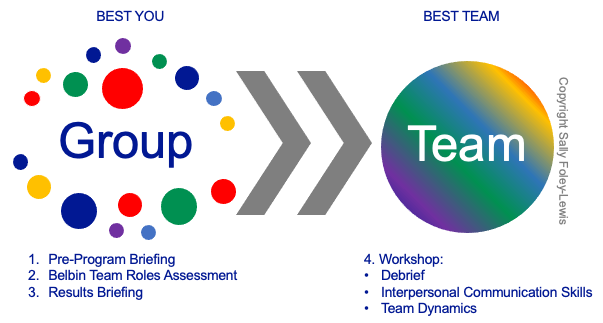 This program will equip your people with:

The is program is ideal for:

The program is not ideal for teams who are: 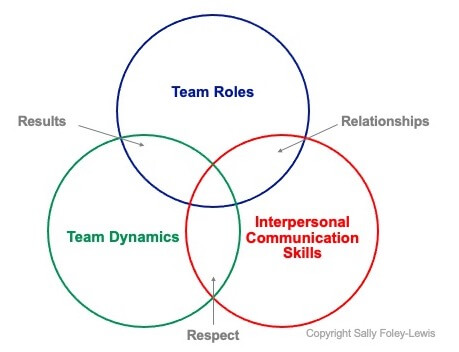 When individuals understand how they can play to their strengths and can see the strengths in their team mates, they can collaborate and communicate far more effectively. Their relationships are stronger; they are able to resolve issues faster; and they can come together quicker during a crisis.

Dr Meredith Belbin and his team discovered that there are nine clusters of behaviour – these were called ‘ Belbin Team Roles’ Each team needs access to each of the nine Belbin Team Role behaviours to become a high performing team. However, this doesn’t mean that every team requires nine people! Most people will have two or three Belbin Team Roles that they are most comfortable with, and this can change over time. Each Belbin Team Role has strengths and weaknesses, and each Team Role has equal importance.

However, not all are always required at the same time – it is important to first look at the team objectives, and work out which tasks need to be undertaken. Once this has been done, discussions can take place regarding which and when each Belbin Team Role behaviour should be utilised.

By using Belbin, individuals have a greater self-understanding of their strengths, which leads to more effective communication between colleagues and managers. Great teams can be put together, existing teams can be understood and improved, and everyone can feel that they are making a difference in the workplace.

None of this is possible without an individual completing a Belbin Self-Perception Inventory and asking for feedback from their colleagues. The Belbin Individual Report that is produced will help pin-point individual Belbin Team Role strengths (and weaknesses) to communicate and share with the rest of the team.

Through a blend of thorough debrief of the Belbin Team Roles reports and workshopping the power of interpersonal communication skills, the team can take greater responsibility for their own behaviours, deeper respect for their team and the important work each member does.

The Workshop is custom designed to suit your team. Most programs include:

When the team can see how they are functioning as a team, they will are equipped to step in, support and guide each other. Aiming for a self-leading, high performance team means the manager or leader can step back and into the role of coach. When teams members can see beyond themselves they have empathy and a wider perspective. This helps the whole team achieve results. The Workshop includes:

Couldn’t recommend Sally highly enough. Sally took our after lunch session of our National conference and got the group really going. She was engaging, developed relationships with individuals within the group and even more impressively arrived early to watch our key note speaker to ensure some continuity in the presentations. Thank you Sally for all your work leading up to, during and after the session.

Sally recently spoke at our Teachers Matter Conference in Brisbane. She was fantastic; knowledgable, engaging and skilful. She led our teachers through understanding their personality types and that of others, to ensure they have the skills to work together productively in teams. Participants laughed, learned and had great aha moments. Thanks for being a joy to work with, entertaining, organised and fun!

What a fantastic session at our recent conference! Sally shared examples and information that were relatable, equipping us with effective productivity strategies and reminded us of good habits we may have let slide. From GM and through the entire group, everyone has learnt new tools and the buzz following the event indicates people are actually implementing them. Productive times (as a result of the personal graphs), chunking and email etiquette are only a few of the solutions in practice following the session. Thanks Sally for sharing your knowledge and practical tips, and throwing in some laughs! Sally’s information, tools, energy and interaction meant it was the best session of the conference!

Not For Profit Sector