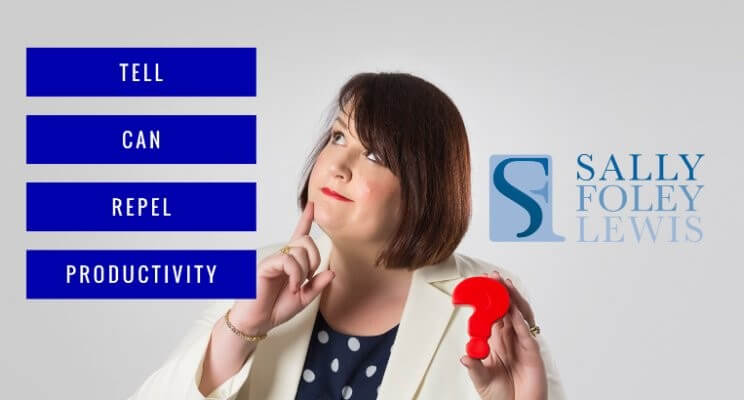 Telling, irrespective of the intention, often has the counter-intuitive impact on engagement and therefore slowing attempts at boosting productivity. Asking builds engagement because asking invites participation.

Coaching has a long history, which can be traced back to Socrates, who believed that individuals learn best when they have ownership of a situation and take some form of personal responsibility for the outcome.

It’s like being in a hailstorm versus a summer shower. A hail storm damages a lot of things but also leaves lasting dents. A summer shower however invites you to play in the puddles, gives life to the garden, can cool a hot day…

Renee was trying to engage her team in a new process to improve customer outcomes and build more capability across the team. The overall goal of the project was fantastic, the team even agreed it was a great idea, but no one put their hand up to do the work.

Once Renee had given the context, including how they had presented their prepared action plan for implementation of the project, I set the challenge of asking her: “Who had input into the project scope, desired outcome and creating the plan?” Renee’s reply was that she had done it all. She was proud, and rightly so, for doing all the ground work. She had obviously put a lot of time and effort in to get to this point. Getting the project to move forward through her team however was looking impossible.

Getting Renee to realise that what she had done was inadvertently excluded everyone from the opportunity to input, strategise and therefore have ownership. While her intention was to save the team time and effort by preparing all the plans, no one had any ownership.

A lot of time has been wasted because Renee really needed to walk the project back to get the team on board. It was a valuable lesson for Renee because not only did she see telling was repelling, once the team were on board with the project they had made significant suggestions to the implementation that returned even greater outcomes.

If getting the team on board with a project has been near impossible for you, ask yourself how early or how late have you invited them in to take part, help and have ownership? Getting the team involved early is the key, letting them contribute is the next key step if you want them more productive.