One Bad Apple’s Impact on Productivity 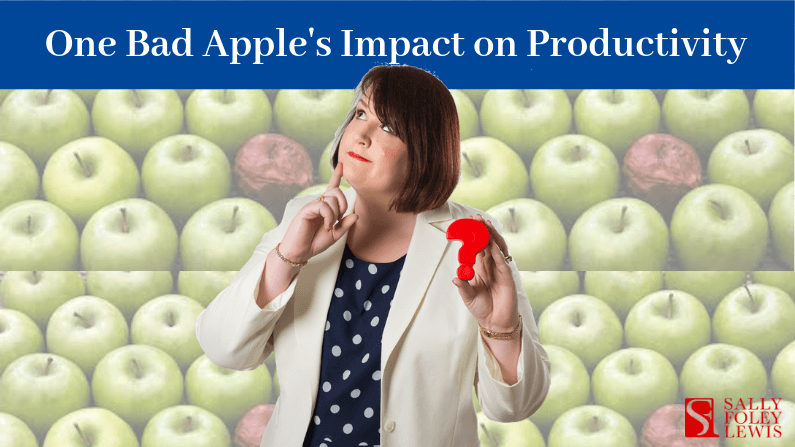 One bad apple spoils the barrel!

I was recently asked to come in and run an interpersonal communication and self-leadership session for a team because conflict was on the rise while deadlines were being missed more often and productivity slipping. I met with the  team leader, Craig, and as I listened to what he was currently experiencing with his team it emerged that there was a twist to his current dilemma. I asked him if he could trace back to where the current issues started. Craig shared with me that he could pinpoint the exact day and time and person. When Pete didn’t get promoted his work performance, communication with others, and his general demeanour took a nose dive. As weeks went on the team culture was negatively impacted with people also becoming short with each other; communication slipping into less human to human and more aggressive emails; and meetings being ineffectual due to lack of preparation and participation.

What we did next?

Craig insisted on the workshop being delivered to the whole team and we also put a plan into place to help Pete return to his usual top performance. As we worked together, Craig’s attitude toward the workshop shifted from ‘treating the whole barrel as if all were bad/spoiled’, to one of ‘let’s provide development for the team’. This meant the way Craig promoted the program to the team was very different: more positive and as a general professional development opportunity. The group responded accordingly.

And the Bad Apple?

Pete, Craig and I met to discuss how Pete was feeling and what he was thinking about his performance, productivity and general level of happiness at work. A one-on-one coaching program was set in place for Pete so that we could work on fresh goals for his professional development and career progression.

If you need to help with performance conversations check this book out or let’s chat.