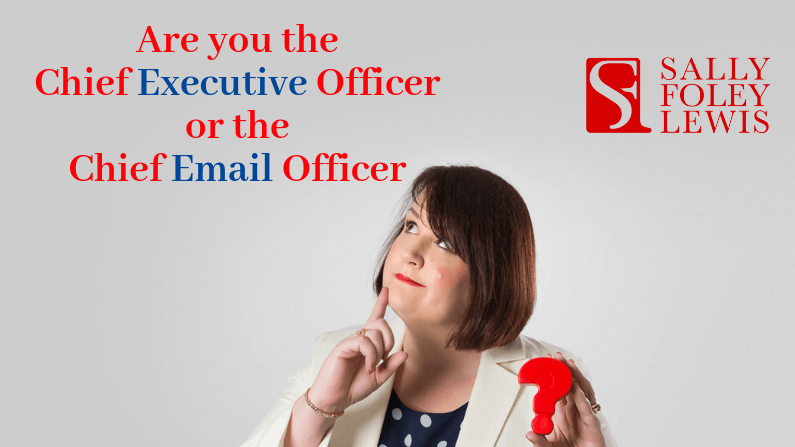 Annabel, a Chief Executive Officer, was complaining how frustrated she was with all the emails that welcomed her every morning and all throughout the day. She feels overwhelmed and often doesn’t want to turn her computer on in the morning because she knows how many emails will be waiting for her. She had already made one positive step which was to remove email from her mobile device. She stopped checking emails at night and first thing in the morning. While initially she thought having email on her mobile device would help her stay on top of her email workload, the emails robbed her personal and family time. Even though this was a positive step it still hasn’t improved the situation when she gets to work. She’s one click away from being the Chief Email Officer!

Emails were meant to be a productivity booster. They sped up communication so we could save time, have instant access to attachments, communicate to multiple people at once, save money, save the world … all hail the mighty email … Okay, maybe not quite save the world!

With all this in mind, the fascinating revelation is that you rarely hear people say how much they love emails. Yet in the same breath, you’ll hear the same people defend emails as they provide them with proof of communication: the conversation trail. Furthermore, you’ll also hear those same people complain about the sheer number of emails and their detrimental effect on their organisation’s lack of communication!

Does this sound familiar to you? Does any (or all) of this resonate with you? I hear these complaints regularly when I deliver productivity training and mentoring.

One of my clients asked me to mentor and train a manager who needed to improve his people skills and especially his communication. The manager’s emails did not make sense and were considered too direct and aggressive. These emails were being sent to staff and external stakeholders. The business’s reputation was at stake, not to mention the staff’s morale. An audit of the manager’s emails and process for handling emails concluded that the manager needed to:

Reports had been received that the manager’s emails read as though he was inappropriately telling people how to do their job. In one instance, a client reported: “He’s trying to tell me how to suck my own eggs.” One unhappy client! This was not what the manager had intended. However, because he wasn’t reader focused, his emails backfired.

Here are some more tips for efficient email processing:

1. Don’t be afraid to unsubscribe. If you’ve not read a subscribed email newsletter for more than three weeks or three months, get rid of it. You’re unlikely to read it. Emails that languish in your inbox look like more work to do, which adds to feelings of overwhelm.

2. Use rules. Send important emails to different folders so you know where they are and can get to them later.

3. This is a variation on David Allen’s Getting Things Done philosophy of productivity: If you can handle an email in two minutes, do it. Get it done. Get it out of your way. If you can read it, action it and deal with it in two minutes, then you don’t have to worry about it anymore.

Many leaders tell me they don’t want to ignore emails or hold them over until the next day, even if the email arrives at 11pm. I wonder what is the driving force behind that. Is it about one’s ego, their sense of being needed? Is it about feeling on top of everything? Or is it about sticking to a personal brand and culture of always being switched on, of always being connected and attentive to your people and customers?

If you are one click away from being the Chief Email Officer, then I can help you. I would say email me, but that would be just too ironic, so click here instead.